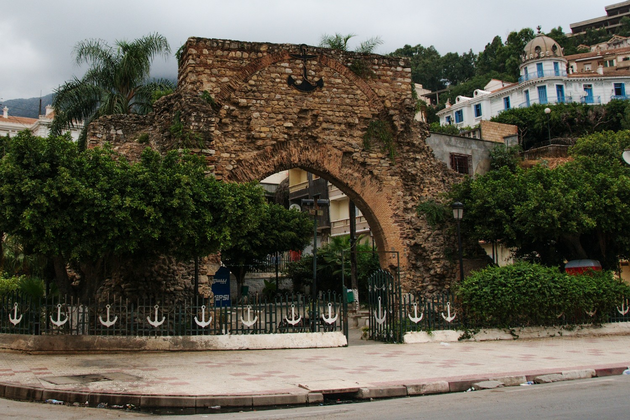 Share
Bab al-Bahr is one of the oldest surviving gates in the Maghreb (besides Bab Guissa in Fès). It was one of the six gates of Bejaia’s wall built in the mid- to late eleventh century when the Hammadids were masters of the city.
As its name suggests, it was the gate that faces the sea, but not only. It was at the same time the sea entrance of Bejaia. Indeed, by passing under its large arch, boats and small ships entered the city’s port.
This gate incorporates constructive techniques used by the hammadids in Qal’a Bani Hammad, namely: the shape of the pointed arch which was not horseshoe-shaped, and the wall apparatus made of an alternation of rubble and brick courses. The pointed arch is built of radiating brick courses resting on horizontal brick courses which themselves rest on two stone imposts. The gate is surmounted by a semicircular discharging arch, distributing the weight of the wall on either side of the pointed arch.
Currently, a large part of the gate is buried, making it difficult to determine its height, but the opening would have reached about 10 meters high by 6 meters wide.