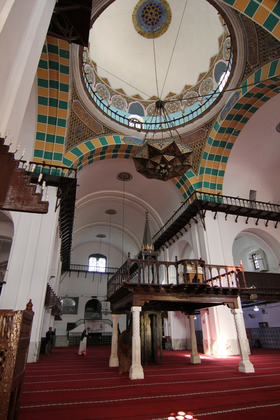 Share
Jami' al-Jadid, also known as the Mosque of the Fishery, is a congregational mosque located in Algiers, the capital city of modern-day Algeria. The mosque is dated to 1660/1070 AH by an inscription over its main entrance portal. That inscription also attributes its construction to al-Hajj Habib, a Janissary governor of the Algiers region appointed by the Ottoman imperial administration in Istanbul. The mosque's Ottoman patronage directs the structure in terms of both planning and ornamentation, but its location within a North African culture retains an underlying influence on the project. The building is unique in its blend of multiple architectural traditions, also incorporating elements from Andalusian and Italian religious architecture that were influential in north Africa at the time.

The Mosque of the Fishery forms the eastern edge of the Place des Martyrs, its qibla wall abutting the northern side of Boulevard Amilcar Cabral. The Almoravid Grand Mosque of Algiers also sits along the boulevard, seventy meters to the east of the Mosque of the Fishery, while a step down in terrain immediately southeast of the thoroughfare forms the road along the Algiers harbor. The mosque got its informal name from this proximity to the harbor, as it was frequented by the local fishermen. The mosque is located in a part of the city that used to be the southern tip of the Almohad qasba, which was largely razed during the French occupation of Algeria in the late eighteenth century. The plan of the mosque measures twenty-seven meters wide east to west and forty-eight meters long north to south. Its longitudinal axis is rotated twenty degrees from the north-south meridian, and the qibla wall forms the southern edge of the building.

The rectangular mosque is unevenly divided in plan into a grid three aisles wide and five bays deep, excluding a sixth bay of rooms that flank the central entrance stairway leading down into the mosque. The stairs have been added as the street level has risen: currently the ground level of the interior of the mosque is five meters below street level. Eight large stone piers, each two meters square in plan, demarcate the building's interior subdivisions. The piers are surmounted by round arches that support the cloister-vaulted ceiling above the central aisle and the gored domes over the side aisles. The round arches reach nine meters above the floor at their centers, while the central vault that they support reaches a height slightly above fourteen meters. The central aisle and the fourth bay are considerably wider than the other five-meter-wide aisle and bays, measuring nine-and-one-half meters wide between the piers. Their expanded dimensions create a cruciform figure in the plan, recalling other Ottoman mosque designs from the seventeenth century that typically include large domes at the intersection of perpendicular axes.

The intersection of the two major axes is crowned by an eight-meter-tall pointed dome rising from pendentives and a drum that is approximately ten meters in diameter. The center of the dome reaches a maximum height of twenty-three meters. Windows perforate the drum of the dome as well as the tympana of the blind arches along the exterior walls. The mihrab and marble minbar are located directly beneath the central dome, as is often the case in Ottoman mosques. This is in contrast to the North African tendency to place the minbar along the qibla wall at one end of a large hypostyle prayer hall, which commonly features a T-shaped plan instead of the quatrefoil or octagonal Ottoman arrangements. However, the plan of the Mosque of the Fishery differs from that of typical quatrefoil Ottoman mosques such as Sinan's Sehzade Mehmed Mosque (1544-1549 CE / AH 951-956) in at least two significant ways. The supporting domes that abut the central dome on all four sides in the Ottoman model were replaced with a vaulted ceiling on two opposing sides in the Algerian example, and one of those vaulted aisles was further extended by two bays to create an asymmetry within the plan of the prayer hall that resembles the nave of a European church. This move effectively encloses the space that serves as an exterior forecourt in mosques like the aforementioned Sehzade Mehmed.

The stone structure of the Mosque of the Fishery has been completely whitewashed on its exterior, including the domes and vaults of the roof, resulting in a clean, unified appearance. One of the only hints of color on the crisp exterior is a thin line of tile-work that trims the decorative merlons running along the top of the mosque's perimeter walls facing the street and the Place des Martyrs. Another decorative element on the exterior of the building is a delicate metal finial composed of four stacked spheres atop the central dome.

Though the planning and decoration of the Mosque of the Fishery reveals a clear Ottoman influence, curiously the minaret of the mosque is based almost entirely on traditional North African models. Initially reaching thirty meters high, today the minaret extends twenty-five meters above the level of the Place des Martyrs due to the gradually rising street level. The minaret is square in plan, with a straight shaft that houses three interior levels connected by a narrow winding enclosed stair. The two upper levels of the whitewashed stone structure are inset with decorative panels; the rectangular inset panels on the second level frame ovals are of patterned tile, while the third level features clock-faces surrounded by rectangular tiled frames on all four elevations. The clock, integrated into the minaret by Bournichon, was originally part of the the Palais Jénina. Above the third level is a balcony edged by pyramidal merlons, accentuated by a wide tiled cornice wrapping all four elevations. The balcony surrounds a small square pavilion with a domed roof, also trimmed with petite merlons and capped by a finial of three metal spheres. The pavilion is open air, with doubled arched openings and a central oculus as perforations on all four sides.

The confusion of architectural traditions continues in the decoration of the interior, where the minbar's ornamental carvings reveal decidedly Italian influences while the mihrab's prominent horseshoe arch follows Andalusian models. The use of Italian marble instead of wood for the minbar reflects Ottoman tastes, though the components are all typical of North African minbars.

It has been suggested by some scholars that the uniqueness of the Mosque of the Fishery could be attributed to its designer's unfamiliarity with certain Ottoman architectural practices due to the physical displacement of Algiers from the seat of the empire in Istanbul. This physical and cultural distance could have led to the mixing of techniques between Ottoman, North African, and southern European traditions clearly visible in the unusual mosque. However, to its contemporaries in seventeenth-century Algiers, the mosque would certainly have appeared Ottoman in contrast to the many other mosques in the city that strictly followed North African building traditions.