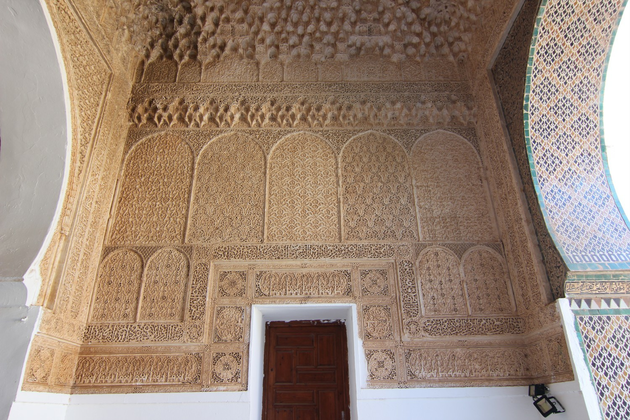 Share
The village of ‘Ubbâd (El-Eubbad), 2 km sw of Tlemcen and now part of the city proper, is the burial place of Sidi Shu’ayb Abu Madyan (Sidi Bou Medien), a figure of major importance in the early history of Sufism in the Maghreb. He died there in 1198 on his way to Marrakech respond to a summons from the Almohad Sultan Abu Yusuf Ya’qub al-Mansur.  The village was already a pilgrimage center for the tomb of Sidi al-Abbad.  The Qubba of Sidi Bou Madyan was constructed by Mohamed Al-Nasir near al-Abbad's tomb at the end of the 12th century. [1]

In the middle of the 14th century it was expanded by Sultan Abu Al-Hasan of the Marinids to include mausoleum and baths along a plan similar to that of the mosque of Sidi al-Halwi Mosque, also in Tlemcen.[2]

The mosque is a particularly notable example of Marinid architecture.  The main entrance is a 7 meter high, elaborately decorated monumental gate behind which are stairs and leading to the actual door to the mosque.  The vestibule is adorned with intricately carved plaster panels and a muqarnas dome. The next set of doors "consists of two panels of cedarwood covered in chiselled and engraved bronze leaf,"[3] and opens onto the courtyard.  In the center is a basin for ablution.

The square courtyard is enclosed by the archway of the prayer hall that faces the main entrance, and on either side of this by two elevated galleries (reserved for women); along each of its other sides.[4]  Opposite the monumental entrance is the prayer hall, with horse shoe arcades, elaborate stucco decorations in floral, calligraphic, and geometric motifs, and a muqarnas dome. The brick minaret is square, decorated with ceramic tile, a style similar to that of the Kutubiyya in Marrakech.[5]  The hammam, ablution station, and latrines for the mosque are still in service, to the east of the mosque.

The tomb of Sidi Boumadyan is found at a lower level than its courtyard entrance. One descends steps in order to reach a small square courtyard surrounded by galleries of horseshoe arches held up by onyx columns. The two bands on either side of the qubba door carry an inscription in Andalusian Maghrebi. The qubba, which houses the tomb that is separated off by a woodwork screen, is a square construction surmounted by a dome that is covered by a four-slope roman-tiled roof.

According to the Nomination to the UNESCO World Heritage List submitted by Algeria, the tomb chamber houses the remains of the Abu Madyan and "Sidi Abd-es-Selàm, the Tunisian."[6] The door to the street from the tomb is elaborated decorated with a painted floral motif a two columns from the Ottoman era.  An antechamber is built around a central courtyard.