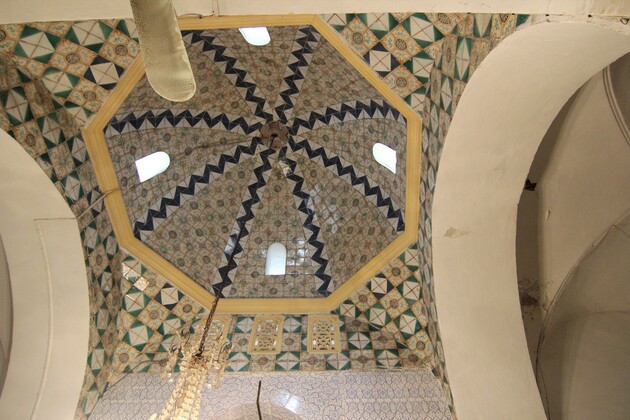 Share
The Pasha mosque was constructed in 1795, on orders of Baba Hassan the Pasha of Algiers, to commemorate the expulsion of the Spanish from Oran.
The outer wall of the mosque follows the curve of the sloping street that borders it. Access is via an entrance porch covered by a dome and built in 1864 under the supervision of Viala de Sorbier, an architect who worked extensively on medieval monuments in Tlemcen and Nedroma. Indeed, the neo-Moorish style of this porch contrasts sharply with the Ottoman style of the rest of the building.
The entrance courtyard is surrounded by arches supported by small columns, and decorated in the middle with a fountain sheltered under a domed pavilion. The prayer hall is almost square in plan. It is accessed by two side doors, and surmounted by an octagonal dome of about 12m in diameter. This central dome is supported by 12 arches and surrounded by nine cupolas which are arranged along the walls of the prayer hall alternating with groined vaults. In the prayer hall, there are cylindrical columns around the central dome, but also square pillars with chamfered angles. The capitals are decorated for the most part with a geometric palm leaf pattern.
The minaret stands in the southeast corner of the prayer hall and has an octagonal base. It comprises two levels separated by a cornice and topped by a lantern. Although the upper level is less wide than the lower level, both are adorned in the same way: two superposed interlacing lobed arches are surmounted by a ceramic tile frieze. The octagonal lantern is covered with ceramic tiles, with an eight-sided cupola above it. An ancient legend widespread in Oran says that the depth of the minaret’s foundation is equal to its height.
French troops occupied the mosque during their invasion of Algeria, and the mosque was used as a billet for French soldiers. In 1835, the building was re-established as a mosque and renovated three decades later. In 1952, the mosque was listed as a historic monument. Since 2010, it has been closed to the public for an indefinite period.
--Amine Kasmi, 2018
SOURCES:
Bourouiba, Rachid. Apports de l’Algérie à l’architecture religieuse arabo-islamique. Algiers: OPU, 1986.
Cruck, Eugène. Oran et les témoins de son passé. Oran: Heintz, 1956.
Marçais, Georges. Architecture musulmane d’Occident : Tunisie, Algérie, Maroc, Espagne, Sicile. Paris: Arts et Métiers Graphiques, 1954.
Piesse, Louis. Itinéraire historique et descriptif de l’Algérie, comprenant le Tell et le Sahara. Paris: Hachette, 1862.