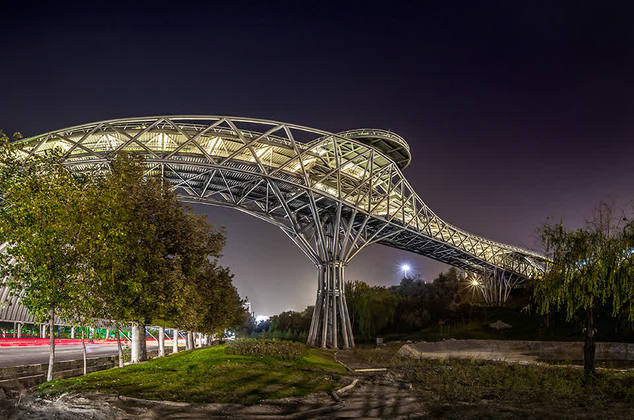 The architects first conceived the two-to-three level, 270-metre-long curved pedestrian bridge of varying width, a complex steel structure featuring a dynamic three-dimensional truss with two continuous deck levels that sits on three tree shape columns, with a third where the truss meets the column branches. It was an imaginative leap beyond the basic competition brief of designing a bridge to connect two parks separated by a highway in northern Tehran, without blocking the view to the Alborz Mountains. The structural elements are based on a latent geometrical order rotated and repeated in three dimensions. The result is a spatial structure large enough to create an inhabitable architectural space, where people congregate, eat and rest rather than just pass through. Multiple paths in each park were created that would lead people on to the bridge. Seating, green spaces and kiosks encourage people to linger on a site where greenery has been preserved by the minimal footprint of the bridge, whose curve offers a variety of viewing perspectives.