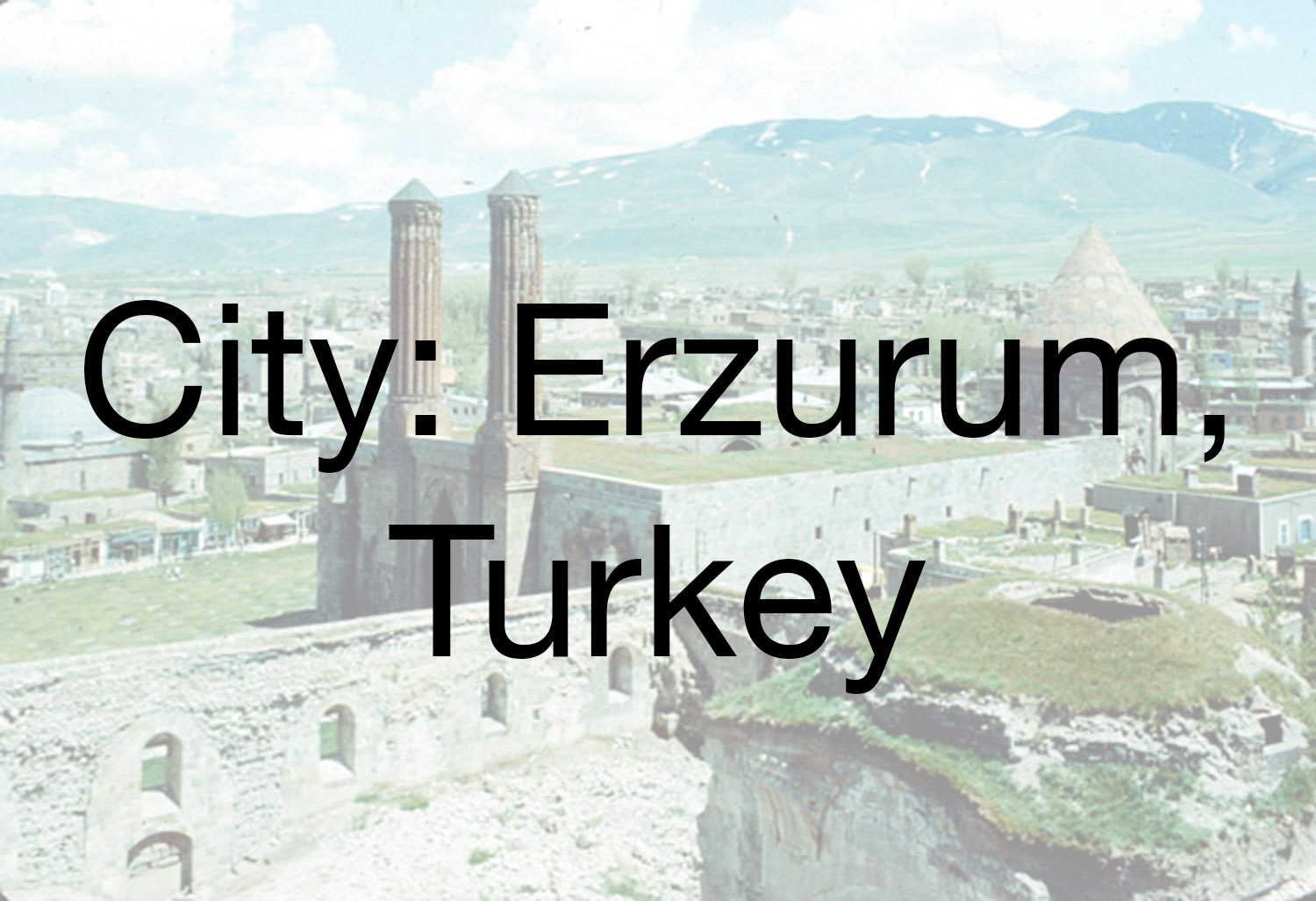 Erzurum is located on the high plains of north-east Anatolia at an elevation close to two thousand meters. It lies immediately north of the Palandöken Mountains at the southeastern end of the plain known as Aşkale. The sources for the tributaries of the Euphrates, Aras, and Çoruh rivers are all located in the high hills of this area. This region has been inhabited for thousands of years by settled populations, the earliest going back to 4000 BCE. However, the city as such was founded as a trade colony in the fifth century CE and named Theodosiopolis in honor of the Byzantine Emperor Theodosius II (r. 408-450). It was known in Armenian as Karnoi Kalghak, from which came its medieval Arabic name "Qaliqala," used in geographical texts. Its modern Turkish name Erzerum either comes from the Arabic/Persian toponym Arzan al-Rum/Arzan-i Rum, meaning "Arzan of the Byzantines" (after the ancient city of Arzen nearby that was sacked by the Seljuqs) or Ard al-Rum/Arz-i Rum ("Land of Rum," i.e. Byzantium).1

The central city of Theodosiopolis was protected by double walls enclosing a vaguely rectangular area. The citadel had additional fortifications along the inside of the eastern wall. Given the city's importance for local trade and manufacture, the Byzantine reign was interrupted by periods of Umayyad, Abbasid, and Armenian occupation. Almost nothing survives from the Byzantine period and the early Islamic periods.

Circa 1080/473 AH, a Turkmen military commander named Abu al-Qasim Saltuk (Saltuq) took Theodosiopolis from the Byzantines. Under his descendants, the Saltukids, Erzurum became the capital of a larger political principality that included the Aşkale plain and neighboring basins of the Aras and Çoruh rivers. The city flourished under Saltuqid rule and it is from this phase that its earliest Islamic monuments survive. The Ulu Camii (Great Mosque) was reconstructed circa 1179, as were the citadel walls. Saltuqkd patrons are also responsible for constructing the clock tower known as Tepsi Minare and the Kale Camii (Citadel Mosque).2

The Seljuk prince Mughith al-Din Tughrul and his brother Rukn al-Din Sulayman conquered the city in 1200-1201/597 AH and ruled there until 1230/627 AH, after which Erzurum was incorporated to the Empire the Seljuks of Rum based in Konya and ruled by ‘Ala al-Din Kayqubad I. Following the Seljuk capture, work began on the Çifte Minareli Medrese.

The Ilkhanids took the city from the Seljuks in 1242/639 AH. Among the Ilkhanid contributions to the cityscape are the Yakuytiye Medrese and various tombs (kümbets) such as the Cimcime Sultan Kümbet, Karanlik Kümbet, and the Üç Kümbetler.

From 1335/736 AH and the dissolution of the Ilkhanid Empire to its conquest by the Ottomans in 1514/920 AH, various Mongol and Turkmen tribes (beylik) ruled Erzurum intermittently, including the Togayli, Çobanli, Eretna, and Karakoyunlu families.

After the Ottoman conquest in 1514, Erzurum's commercial and military stature increased, as did the size of the city. The population grew extensively into suburbs beyond the city walls, which were taken down in the late 18th century.

In 1829 the Russians damaged the city and built a new citadel in the center. During the Crimean War, Erzurum and its suburbs were defended by a number of forts built by the British who were fighting alongside the Ottomans. During World War I, Russians occupied the city for two years (1916-1918). The city hosted a revolutionary congress led by Mustafa Kemal in 1919, four years prior to the formation of the Turkish Republic.

Today, Erzurum is a city of about 600,000 people and a major throughway for the truck traffic to Iran, as well as an important military and commercial center.