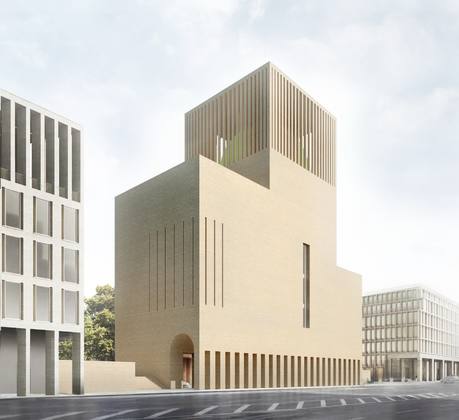 Share
The House of One is a structure planned for construction in Petriplatz, the medieval birthplace of Berlin. It will contain a church, mosque, and synagogue, each of which will be connected to a common area. The first church was built there in the first half of the 13th century, and one existed on the site until it was destroyed in World War II, though the church was destroyed by fire and rebuilt multiple times.  The ruins were demolished in 1962 in order to build a parking lot. Archeological digs that started in 2006 have unearthed the ruins of the various churches.

The idea for the House of One was conceived in 2008 when the Evangelische Kirchengemeinde St. Petri-St. Marien (Evangelical Church of St. Peter-St. Mary) reached an agreement with the government, "to build a new religious building on the square that will translate the history of the place into a modern vernacular."2 They were joined by the Jewish Community of Berlin and Abraham Geiger College representing the Jewish faith, and the Forum für Interkulturellen Dialog e.V. (the Forum for Intercultural Dialogue) representing the Islamic faith. House of One is intended to be

a house of prayer and learning, open to all, in which Jews, Christians, and Muslims can worship and get to know one another, while engaging with the secular majority of the city as well, seeking dialogue and discourse – a house of prayer and at the same time a house of interdisciplinary study of the religions, their history, and their current role in Berlin and in Germany.1

It is stipulated in the 2011 charter for Bet- und Lehrhaus Petriplatz, Berlin (House of One, Berlin) that none of the three religious communities is exclusively representative of the faith, and other communities are invited to join the project.

In 2012 a competition was held to design the building.  Criteria for the competition stipulated that the design of the building should:
- immediately convey the building's "sacred, transcendent otherness,"
- appear "open and inviting to all, including those of no religion,"
- express the "complex relationship between the religions" by providing separate, distinct worship spaces, and common space for all,
- use light, especially sunlight, "to highlight the symbolic and functional aspects of religious architecture," and "create a suitably reverential atmosphere."2

The call for entries also recommended the structure be built with brick so that it would be in keeping with the previous churches on the site, and the historical prominence of brick in the architectural history of the region.

Over 200 submissions were received from 14 different countries.  Ultimately, the jury unanimously selected the design by Berlin-based Kuehn Melvezzi, a firm that specializes in "public spaces and exhibitions."3  The building will be brick and contain three distinct houses of worship, each connected to a central, domed tower that serves as communal entrance. According to Wilfried Kuehn, each part will

have a large number of perforations in the brickwork that let light through.  The arcade, domed room and loggia are bound by the idea of the transparent wall that filters the inside from the public with varying intensities. In contrast to this, each place of worship is characterized by its own perforated bricks that shape the light."4

Artifacts from the churches that previously existed on Petriplatz will also be exhibited.  Fundraising is currently underway to finance the structure, which will be built in three phases starting in 2017.

Hohberg, Gregor. "About the House of One." Interview with Michael A. Toler at Marienkirche (St. Mary's Church) in Berlin. http://www.marienkirche-berlin.de/  31 Mar. 2015.