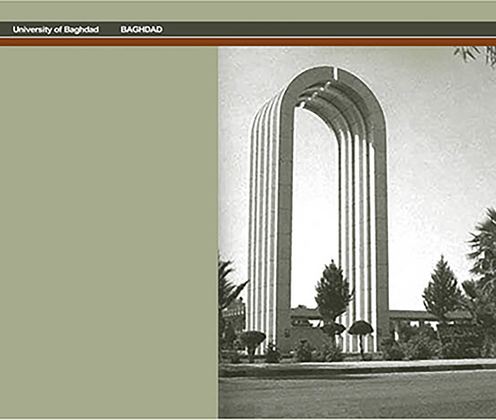 Share
The University of Baghdad is a premier institute of higher education in Iraq, with a central campus located in the Jadiriyya neighborhood of Baghdad. The university now incorporates a number of institutions throughout the country, some that have been in existence since the early twentieth century, but the laws establishing a university by this name in Baghdad and designating an administrative board date to 1956 and 1957 (1378 AH).1 The original design of the campus at al-Jadiriyya dates to 1959. The design was a major undertaking and represents one of a series of ambitious architectural projects awarded to architects of international renown and realized during the 1950s as part of an attempt to re-imagine the Iraqi capital.2
Walter Gropius, famed architect of the Bauhaus, was lead designer of the new university’s campus. The Architects Collaborative (TAC), a firm based in Cambridge, MA of which Gropius was a founding member, undertook the project, with Robert S. McMillan, Louis A. McMillen, Richard Brooker, and H. Morse Payne Jr. playing major roles in the design. TAC collaborated closely with Hisham Munir, an Iraqi architect who had completed his degree in the United States several years prior and had returned to Baghdad to begin his own practice with colleague Midhat ‘Ali Madhlum. Munir and Madhlum were instrumental in advising the American firm on local practices and building materials, as were other young Iraqi architects such as Rifat Chadirji, Mohamed Makiya, and Nizar and Ellen Jawdat, who had studied abroad and were enthusiastic about Gropius as an architect.3
The site chosen for the campus is a piece of land in the southern part of Baghdad surrounded on three sides by a meander of the Tigris. The planners believed that this site would remain secluded and unaffected by the development of the surrounding city.4
The original design envisioned a complete University campus including 273 buildings on 500 hectares. The plan encompassed buildings for three academic faculties: sciences, letters and humanities, and architecture and engineering, as well as athletic and recreational buildings, an infirmary, student dormitories, and staff housing. Among these buildings were a mosque and an auditorium to seat 18,000.5
The layout as originally planned featured a central pedestrian core of academic buildings surrounded by a ring road for access. Outside this core, satellite clusters were situated in a parkland of date palm groves, open areas, and extant dykes, which added topography to the otherwise flat terrain.
The buildings themselves connected to one another like rectilinear blocks to form courtyards and open avenues in the spaces between. This layout offered respite from the summer heat of Baghdad and conveyed a sense of connection between the various departments and fields of knowledge they represented. A tower for faculty offices and a main gateway in the form of a concrete arch rising eighty feet and symbolizing the “Open Mind” served as monumental accents amidst the otherwise low-rise campus buildings.6
The design took shape successfully over the following decades, but was never fully realized as originally planned. The department of letters and humanities, for example, is situated at the campus of another university administered by the University of Baghdad.
Notes:
Sources: