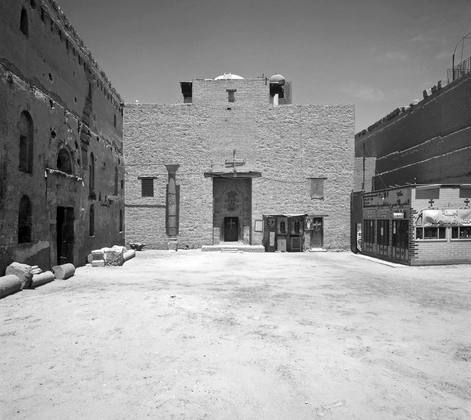 The Red Monastery Church as it now exists represents two major phases of construction. The dramatic triconch sanctuary, including its facade wall, and the adjoining side rooms were all built in the early Byzantine period, though there are some vital medieval and early twentieth-century structural interventions. Our dating of the church to the late fifth century rests largely on a close analysis of the architectural sculpture in the church by the architectural historian Dale Kinney. The tall exterior walls of the church, which surround both the sanctuary and the area of the nave, were rebuilt sometime between the tenth century and 1301, although they include two monumental sculpted portals reused from the earlier structure. The fortified tower on the southern side of the building is approximately contemporary with the medieval walls. The galleries and roof of the medieval nave no longer survive. It is possible that they were severely damaged during an earthquake. At some point after the collapse of the roof and galleries, the sanctuary was completely enclosed, and it functioned as a self-contained church, with an altar in the eastern lobe, behind a screen. In the early twentieth century, the late medieval wall enclosing the sanctuary was removed and replaced by a new wall that incorporated the late medieval portal.

The triconch design of the sanctuary includes three apses rather than the typical single one, which creates a more complex space and provides a far broader field for large-scale images than exists in most church sanctuaries. The early Byzantine paintings date from between the late fifth and the sixth or early seventh centuries. They are located in the triconch, the facade wall, and in the side rooms of the sanctuary. There were three principal phases of early Byzantine paintings, as well as a much less comprehensive fourth phase. Despite the often-repeated, but incorrect characterization of Christian wall paintings in Egypt as frescoes, they are in fact made with tempera or encaustic (wax-based) paint applied to dry plaster. The stratigraphic ordering of the phases depends on the plaster layer (rendering). For the most part, there is a close correlation between the plaster and paint layers of the Byzantine phases, although the paintings of the first phase may have been applied on the earliest rendering in different stages. All three of the major early Byzantine periods of work included substantial areas of ornamental paintings, especially the second phase. The smoke of lamps, and of incense used in the liturgy, darkens surfaces quickly. During the course of conservation, little or no buildup of soot and dust was discovered between the Byzantine paint layers. This observation makes it possible to assert with confidence that there were minimal lapses in time between the four Byzantine programs; all were probably done within about a hundred years or even less. Additional paintings from the medieval period probably range from the tenth to the late thirteenth centuries, and comprise at least four phases of work. These later paintings are found primarily on the nave walls, but some are also located on the façade of the sanctuary.