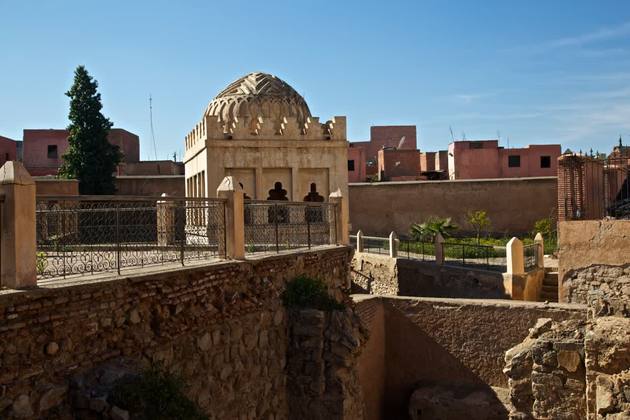 Share
The Qubbat al-Barudiyin was built in 1120 as an ablution fountain and waterworks for the Almoravid congregational mosque in Marrakech. The mosque complex was constructed between 1120 and 1133 as a part of the Almoravid palace, Qasr al-Hajar, by then-ruler Ali bin Yusuf. When the Almohads took Marrakech in 1147, the Almoravid mosque was closed and allowed to fall into disrepair. Today the qubba is the only structure that survives from the mosque or the palace.

The Qubbat al-Barudiyin is located near the site of the now-destroyed Almoravid mosque. Adjacent to the structure is the site of a former monumental fountain, now covered by the qaysariya of the Fasis, a bazaar established by migrants from Fez in the nineteenth century. The qubba is a spectacularly crafted and decorated domed kiosk sheltering a small rectangular water basin. The overall dimensions of the qubba are 7.3 meters long by 5.5 meters wide. The longitudinal axis of the structure is rotated fifty degrees clockwise from the north-south meridian, with its shorter sides, the widths, oriented toward the northeast and southwest, and its longer sides, the lengths, toward the northwest and southeast. Access to the building from the street is through any one of the six arches that support the qubba along its perimeter, with two arches along each length, and one on each width.

From the exterior, one can observe the basic structure of the qubba, in which four massive pillars at the corners of the building and slender columns along its perimeter support the dome and the upper levels of the exterior walls. Along each length of the qubba are two twin arches that are supported by a small square column, which is rotated 45 degrees relative to the face of the elevation. These twin arches are pointed horseshoe arches, in contrast to the five-foiled lobed arches that are found on each width of the structure. On each elevation, the arches are framed by a rectangular area lightly inset into the face of the wall. Above the arched entryways, there is a plain projected band of stone that divides the elevation into two legible levels.

Above this band, in the upper level of each elevation, are new sets of smaller arches of varied types, including horseshoe and five-foiled lobed arches. Each of these arched openings in the upper part of the elevation is also framed by a slight rectangular inset in the wall. Above this second level of arches, there is another plain projected band that is topped by a row of stepped merlons. These merlons each have three stepped levels, with the rises of the steps cut in towards the center of the merlon at an acute angle. The dome of the qubba then rises behind the row of merlons, centered within the rectangular plan.

Stepping into the qubba, it can be observed that the interior organization of the structure does not correspond to its rectangular exterior. Instead, the interior is articulated as to create a square approximately 5.5 meters on a side in the center of the plan. This is achieved through the extrusion of the lobed arches on each width of the qubba one meter inward toward the center of the space, forming vaults at those entries. The water basin that the qubba was designed to shelter is located in the center of the square space, directly beneath the cupola.

The square space at the center of the qubba has four columns at its corners that support a square stone cornice with carved inscriptions. The cornice supports eight finely decorated pendentives that come together over the center of the space in an octagonal ring. The cupola, itself composed of eight lobed arches topped by a shallow dome with eight ribbed indentations, rests on the octagonal support created by the pendentives. Muqarnas are found in the eight upper arches of the cupola, but they are an example of the early development of the muqarna device and are thus much flatter and less structural than those seen in later domes. Sunlight originally illuminated the dome by passing through the arches on the upper level of exterior elevations, then through colored glass windowpanes set in frames of stucco within twelve interior windows. The cupola that is viewed from the interior of the space does not correspond to the larger dome seen from the exterior.

The exterior elevations are relatively free of decoration, as most of the intricate decorative work can be found inside the qubba. However, the surface of the brick exterior dome is covered by an overlapping series of arcatures, or delicate decorative blind arches. Above the arcatures, concentric rings of chevrons cascade down the surface of the dome from a seven-pointed star at the summit.

Inside the qubba, the ground level is mainly undecorated, and the original basin that was uncovered after a series of excavations is unremarkable. The detailed ornamentation within the structure is located above the cornice, which itself bears a faintly legible inscription with the name of the patron of the qubba, Ali bin Yusuf. This inscription was most likely damaged by the Almohads, as they sought to deface many of the architectural achievements of their Almoravid predecessors after establishing their rule of the city in 1147.

The decoration of the qubba was heavily influenced by the Andalusian decorative style that was brought to Morocco by the Almoravids, who established an empire in the eleventh century that gained control over much of Western North Africa and all of the Muslim kingdoms of the Iberian peninsula. Almoravid contact with the Spanish kingdoms led to an importation of Spanish artisans, architecture, and decorative motifs to major cities in North Africa, including the capital of the Almoravid empire, Marrakesh. The ribbed dome, horseshoe arches, and vegetal ornaments in stucco found in the Qubbat Barudiyin can all be traced to the Andalusian artistic influence.

The interior dome of the qubba employs muqarnas vaulting as a form of decoration and support for the upper cupola. Unlike the plain, undecorated arches that cut through the exterior elevations as entryways and upper level openings into the qubba, the spaces between the eight pendentives of the interior dome became highly articulated and sculpted pointed arches. Stuccowork with plant and shell motifs decorates the centers of the pendentives, referring to Andalusian decorative motifs that can be observed in Spanish mosques such as the Great Mosque of Cordoba, or Spanish-made architectural elements found elsewhere in Marrakech. For example, similar carved vegetal decoration can be observed on the renowned minbar of the Kutubiyya Mosque, which was built in a Cordoba atelier and was originally commissioned for the Almoravid mosque that the Qubbat Barudiyin served.

The quality of the materials used in the construction of the qubba was extremely high. Brick formed and stucco decorated the exterior dome, stone formed the exterior walls, and stucco, glass, and woodwork decorated the rich interior. Skilled labor and expensive joinery for the era were used to construct the edifice, which is evident in the good condition of the structure today, despite centuries of use. The dedication to quality in the construction of the qubba reveals the significance that the qubba, as well the mosque that it attended, had for its patron.

The Qubbat Barudiyin stands today in Marrakesh as the only surviving building constructed by the Almoravid founders of the city. It is significant not only for its longevity, but also as an example of the exquisite decorative style that the Almoravids embraced after their annexation of the Andalusian kingdoms.