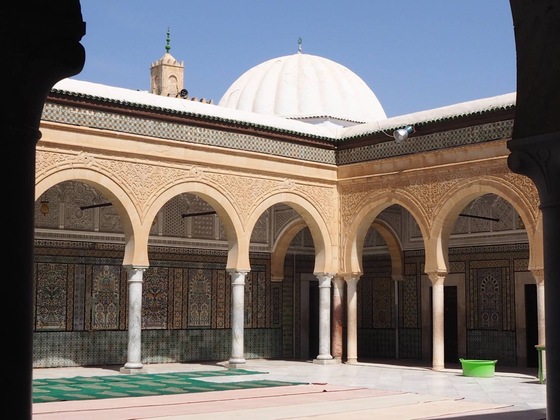 Share
The origin of this complex is the tomb of Abu Zama al-Balawi, a companion of the prophet who was killed in better nearby in 654/34 AH. It is sometimes referred to as the Mosque of the Barber, because it is believed that al-Balawi wore an amulet containing hairs from beard of the Prophet Muhammad.  However, the complex as it exists now was built by Hammuda Pasha who built the zawiya and erected a madrasa. Bey Muhammad ibn Murad renovated the dome of the mausoleum.
The mausoleum is on the east end of the complex where is opens onto a courtyard with porticos on all sides. A stairwell to the southwest of the courtyard leads to the courtyard of the madrasa. Student lodging is situated on the east and west sides; a two-nave prayer hall to the south.
According to Saloua Zangar the mihrab of the mosque

is surmounted by a dome with fluted squinches. At the northeast corner rises an elegant minaret which is reminiscent of that of the Great Mosque at Tlemcen and the Kasbah Mosque in Tunis. (Source: Discover Islamic Art)

To the southwest are the kitchens and latrines.

The complex also contains a warehouse for the storage of products from habous and donations, and an apartment composed of a courtyard surrounded by residential rooms. Known as the “pasha’s al-'alwi”, it used to accommodate the bey in charge of collecting taxes, and later housed the mausoleum’s important guests. (Source: Qantara)

The entrances to the large courtyard on located on the Maghreb Arab Square (Parc du mausolée), a triangular open space paved with tile that is bounded on two sides by Avenue El Iman Sahnoun and Avenue de la Republique. The base of the triangle that forms the boundary of the park runs from the eastern corner of the large courtyard to the southwest, alongside and beyond the wall of the complex.