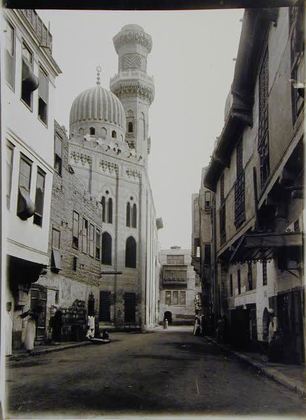 Share
The madrasa was built by Sultan al-Ashraf Sha'ban in 1368-9 and dedicated to his mother Khawand Baraka ('Lady Blessing'), while she was making the pilgrimage to Mecca and Medina. For a female member of the Mamluk court, going on the pilgrimage was a public way to express her piety. She commemorated her return in 1369-70 by endowing the madrasa. She was the concubine of Husayn, one of al-Nasir Muhammad's sons, and rose to fame when her son came to the throne at the age of ten. After her first husband died in 1362, Khwand Baraka married Iljay al-Yusufi, whose monument is in Suq al-Silah. Sultan Sha'ban also began building his own khanqah-madrasa-mosque at the foot of the Citadel, but when he was murdered in 1376, his complex was left unfinished, and he was buried in his mother's madrasa.

The main feature of the facade is the beautiful entrance, which stands in a recess covered by a tier of distinctive Anatolian muqarnas portals. The internal plan is that of a cruciform madrasa constituted of four iwans, although it was built to teach only two madhhabs, the Shafi'i and the Hanafi. The qibla iwan is flanked by two tomb chambers with lofty domes. The large tomb chamber on the left is where Khwand Baraka and a daughter, Khwand Zahra, are buried. In front is an irregularly shaped room that was probably used for storing large Qur'ans or for special Qur'an recitations. The smaller tomb on the right, with no decoration and no mihrab, is the final resting place of Sultan al-Ashraf Sha'ban and his son al-Mansur Hajji (1377-81). There is no Quranic law requiring the separate burial of men and women, but by the end of the fourteenth century the custom had become established.

This madrasa is the first religious structure in Cairo to revert, after a lapse of centuries, to the rather easterly Meccan orientation or qiblat al-sahaba, as opposed to the one favored in Mamluk times. This adjustment of the divergence between the qibla orientation and the main street proved to be very advantageous to the configuration of the building, both inside and out. It allowed the architect to bend the qibla facade with the two domed mausolea towards the main street, thus ensuring higher visibility. The minaret in the middle of the facade, instead of the typical spots on the vault or corners of a monumental portal or at the corner of a facade wall, is unusual.

The complex has been restored by the Aga Khan Historic Cities Programme beginning in 2000. (See: Umm al-Sultan Sha'ban Mosque and Madrasa Restoration and Darb al-Ahmar Conservation and Revitalisation.)

Kessler, Christel. "Mecca-Oriented Urban Architecture in Mamluk Cairo: The Madrasa Mausoleum of Sultan Sha'ban." In In Quest of an Islamic Humanism. Cairo: The American University in Cairo Press, 1984.