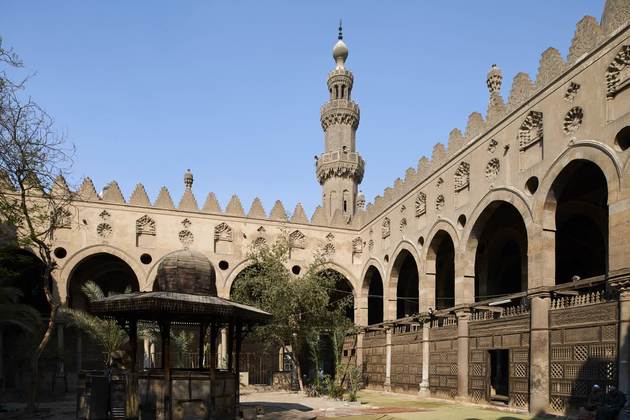 Share
The Mosque of al-Maridani was built for Amir Altinbugha, the saqi (cup-bearer) and the son-in-law of al-Nasir Muhammad, in 1339-40. It is a hypostyle mosque with marble columns supporting pointed stone arches, and has a domed, nine-bay maqsura in front of the mihrab. The exterior facades are decorated with recessed panels crowned with stalactites. The divergence between the street alignment and the interior, which is oriented towards Mecca, is cleverly overcome by a stepped layout of the exterior.

Marble, stone and stucco are all employed in the courtyard facades. The marble columns, like those of the arcades, support pointed arches whose stone voussoirs are framed with a continuous molding forming a loop above the keystone of each arch. Above these arches is a row of alternating keel-arched niches and medallions. Above each medallion is a lozenge. The niches, medallions, and lozenges are all carved in stucco. A line of stepped crenellation adorned with arabesques carved in stucco runs along the summit of the courtyard facades.

The minaret has an entirely octagonal shaft and is topped by a pavilion consisting of eight slender columns surmounted by a bulb on a muqarnas cornice.

Behrens-Abouseif, Doris. The Minarets of Cairo. Cairo: The American University in Cairo Press, 1985.