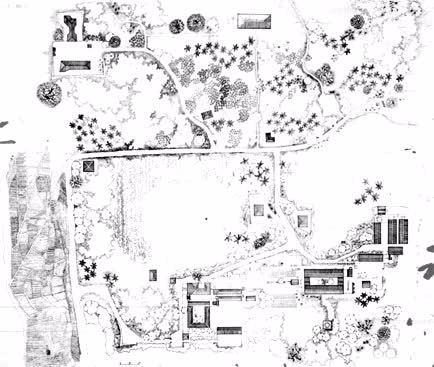 The idea to build the farm was the brainchild of Mother Good Counsel, who envisaged a centre where orphan girls could learn agricultural and homecraft skills. It was she who secured the land - a rubber and coconut estate near Hanwella - as well as persuading the German charity Misereor to finance the project and commissioning Bawa to be the architect.

The project confronted Bawa with the issue of how to place a disparate group of buildings within a large landscape, and formed the antecedent of his designs for Piliyandela Education Centre (1978) and Ruhunu University (1980). The various elements were located formally and orthogonally in plan but, following the precedent of classical Sinhalese architecture, were allowed to 'run with the contours' in section. Individual buildings were positioned carefully to define open spaces and axes and to regulate the vistas between them.

Anura Ratnavibushana, who acted as Bawa's principal assistant for the project, has described how Bawa generated many of his ideas while actually on site, developing them in the evening, in a series of detailed sketches - usually multi ­ layered plans and sections drawn with biro on squared paper. Often he would draw long vertical sections through the site and critical parts of the buildings. Although no models were made Bawa was able to visualize the three-dimensional complexities of the evolving design.

Ratnavibushana would work the ideas up into more finished drawings that would then form the starting point for another round of discussions and sketches. Bawa had recently obtained a copy of Arquitectura Popular em Portugal (Sindicato 1961), a detailed survey of Portuguese vernacular architecture, and this was used as a source book and a means to connect the design back to an important influence on Sri Lanka's own indigenous vernacular traditions.

An early decision to keep an existing estate bungalow - located at the southern tip of a long north-south ridge and visible from the approach road in the valley below - became one of the generators of the scheme. The bungalow was converted to provide accommodation for the nuns and was extended northwards by a courtyard and eastwards down the slope by lines of chicken sheds and a group of farm buildings arranged around an open farmyard. These various elements were all located behind a long raking rubble wall. The visitor climbed the side of the valley to the foot of this wall and was then drawn up to the bungalow's entrance. Two balcony turrets were added to the bungalow as if to provide the nuns with defensive watchtowers, while a simple ambalama was placed at the extreme southern tip of the ridge to serve as a sheltered waiting room. Below this, hidden in the trees, was the priest's house, a symbolically isolated preserve for a solitary male, its steeply pitched thatched roof inspired by Ulrik Plesner's earlier studies of thatched brick kilns (Plesner 1959a).

The bungalow acted as a pivot: turning its corner the visitor joined the main north­south axis of the ridge, encountering the long perspective past the chapel towards the girls’ dormitory and taking in the beautiful panorama of rubber plantations on the hills to the west. The original design for a cadjan­-roofed chapel was never realized, and a more conventional chapel was added in the early 1980s. The girls accommodation comprised two long buildings running either side of a garden court with a separately roofed entrance loggia at one end and a stage at the other. The west building contained the dining room and teaching area, the east the students' sleeping cubicles. Beyond the stage a smaller court was formed by a bakery with a huge tapering chimney and by a row of toilets and washrooms housed within apsidal cells. Finally, marking the north end of the ridge, a sickbay was combined with the main water tank to create an outward cantilevering watchtower. The cowsheds and farm buildings were located below the girls' block on the western flank of the ridge and three communal houses were later added nearby to accommodate groups of older girls.

All the buildings were simple and cheap and were constructed from locally available materials, including coconut timber, rubber wood, clay tile and coconut thatch. The section was designed with overhanging eaves and open trellis clerestories to protect the interiors from direct sunlight and driving rain and to encourage cross-ventilation, obviating the need for glass. Simply designed furniture was produced by village craftsmen. The project offered a vocabulary for contemporary rural redevelopment projects and influenced the government's model village programme in the early 1980s.
The death of Mother Good Counsel robbed the farm school of its guiding spirit and it went into a decline during the early 1980s. The nuns sold the farm to the monks of the de Ia Salle Order, who ran it for a few years as a 'Boys' Town', but by the end of the 1990s the buildings had fallen into disrepair and the estate was sold to a brewery.