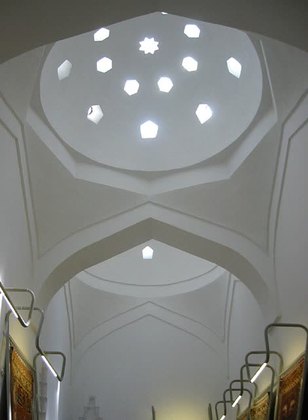 Share
Haseki Hürrem Sultan, the first wife (bashaseki) of Ottoman sultan Süleyman I and mother of Selim II, commissioned a double-bath house to serve Ayasofya Mosque (Hagia Sophia) in 1556-1557/964 AH. Sinan, head architect of the Ottoman court, designed the baths. Abandoned by the late nineteenth century, the baths were restored in 1916-17 and 1957-58, and housed a carpet gallery operated by the Ministry of Culture and Tourism until 2007. In 2008 a 3-year restoration began with the aim of reopening the facility as a bath house.
Site layout:
The baths consist of matching men's and women's sections that are built back to back on a long narrow site situated perpendicular to the Hagia Sophia to the northeast and the Sultan Ahmed I complex to the southwest. Houses behind the baths to the southeast were cleared in the 1850s to accommodate a colossal neo-classical structure built to house the Darülfunun, the first western-style university, which was demolished after a fire in 1933. The dense neighborhood of wooden houses that enveloped the baths to the northwest burnt down early in the twentieth century and was replaced with a tree-lined boulevard leading to the Darülfunun and reorganized as a formal park with a large circular pool in 1939.
Plan:
The baths take the form of a rectangular block, seventy-five meters long, oriented on the northeast-southwest axis. The men's and women's sections are nearly mirror images of one another, and are entered on separate ends of the building's length. The men's dressing room is entered from a five-bay portico facing the Hagia Sophia to the northeast that was rebuilt in 1917. The dressing room of the women's section, on the opposite end of the block, is entered down a set of stairs. An inscription plaque above the men's entrance gives the date of construction and the name of the donor.
The large dressing rooms, which are taller than the rest of the baths, are crowned with a single dome topped by a lantern and have small pools at the center and marble seats along the walls. A single entryway leads into the three-bay cool room in each section, which gives access to the latrines and the service areas that flank the baths. The hot rooms, which are equal in size to the dressing rooms at half their height, consist of a domed octagonal hall extended with four side-iwans and four domed private cells (halvet) at the corners. Except for the iwan serving as the entrance, each iwan has two marble fountains with basins and each cell has three that are placed inside rectangular niches. An octagonal marble platform (göbektasi), which is used for resting and massage, occupies the center. Water is drawn from depots linked to a furnace (külhan) behind the hot-rooms, which were linked with a new entryway during restorations.
The plastered interior is paneled with gray marble reaching human height and is largely left plain except for a few muqarnas highlights and special arches. The dressing rooms have three rows of windows and oculi with lanterns while the hot and cool rooms and the private cells are lit exclusively with lights pierced into the brick domes, which are clad with lead. Rough stone was used to construct all sections except for the men's dressing room, which is built of layers of brick and cut stone. The back-to-back arrangement of twin-baths, which are often built side-by-side to conserve energy, is unique to the Haseki Hürrem Baths.
Sources: