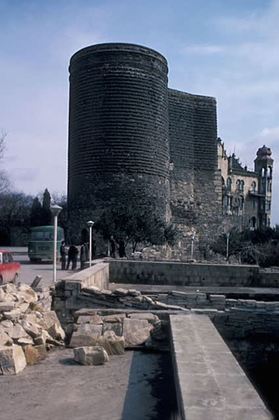 Share
The Maidens' Tower is a round bastion tower located along the ancient coast of Baku. It may once have been part of the city walls that enclose the old town. Its site was inhabited since the Paleolithic period and reveals evidence of Zoroastrian, Sasanian, Arabic, Persian, Shirvani, Ottoman, and Russian presence in cultural continuity, revealed in different structural methods used in its construction. The foundation of the tower is dated between the sixth and the seventh centuries, while the shaft is supposed to have been completed by the twelfth century.

The Azeri name of the tower, Kiz Galasi, is translated as the Maidens' Tower by Ilona Turanszky. However, Vagif Aslanov claims that the word root "gal" in Azeri, apart from meaning a "fortress", can also be translated as "to build a fire". Different etymological analyses of its name, along with the obscure configuration of its interior, have generated a plethora of interpretations about its function. It is widely accepted that the tower was constructed as a singular defensive structure and probably also formed part of the city walls of Baku, however, it is also claimed to have functioned as a Zoroastrian Temple, a Zoroastrian "Tower of Silence", a lighthouse or as an observatory.

The shape of the bastion is quite unique. It consists of a cylinder seventeen meters diameter, adjoined by a wall segment to the east that is trapezoidal in section. It is flanked on the rear side by the massive city walls, of which, fragments remain today. The height of the tower varies between thirty-two to thirty-five meters, while the height of the interior space is twenty-eight meters. The walls are made of brick and they taper from five meters at the base to four meters at the top.

There is a single entrance on the southern face of the tower. Inside, the central cylindrical void is divided by shallow vaults into eight floors with a single room on each floor. There is an aperture of three meters diameter at the center of each floor plate that runs through the whole bastion and serves as a source of lightning for the interior. Loopholes and small windows provide additional light and air circulation. The ground floor is linked to the first floor by a ladder, from where a spiraling staircase leads up to the other seven flours of the tower. A large opening cut on fifth floor wall has been interpreted by some as a doorway.