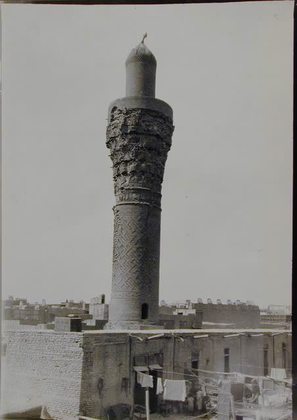 The Suq al-Ghazl Minaret stands on the site of the original Khulafa Mosque, constructed between 902 and 908 by the Abbasid caliph Muqtafi. It was reconstructed multiple times, most significantly in 1272 after being burnt to the ground in 1258 during the Mongol invasion of Baghdad. The minaret was built in 1279, probably by the order of 'Ata Malik al-Juwaini, making it a product of the Ilkhanid period (1256-1353).

The minaret was referred to as Suq al-Ghazl Minaret, in reference to the wool and cotton market that developed to the east of the site. Suleyman Pasha constructed a small Ottoman mosque to its west that was known as the Suq al-Ghazl Mosque, but it was demolished in 1957. While initial efforts to restore this monument were executed in 1917, it wasn't until 1960 that it was completely finished. In 1960, the Ministry of al- Awqaf commissioned Mohamed Makiya to build a new mosque that would integrate the minaret.

Makiya's monumental architecture was developed around the only remaining artifact of the mosque once occupying the space: the dilapidated minaret of al-Ghazl.  Makiya’s innovative design for the mosque, located in the Sabbabigh al-Aal neighborhood of Old Baghdad, embodied ideas of urban conservation, regionalism in form, and continuity of architectural heritage; ideas which informed his work henceforth as well as that of younger generations of architects.

Constructed in brick, the minaret rises from a twelve-sided foundation featuring four layers of muqarnas that support an enclosed passageway. Above this the cylindrical shaft continues and is capped by another five layers of muqarnas extending outwards and supporting another circular gallery. Above this ascends another small column that buttresses a pointed dome. The minaret exhibits elaborate arabesque-carved brickwork and geometric patterns. This is the only minaret in Iraq with a twelve-sided base.