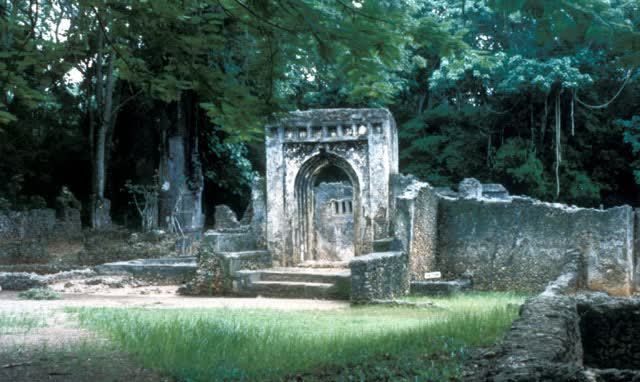 Share
The palace was built in the early fifteenth century in the mysteriously undocumented Arab-African city of Gedi, which was abandoned in the sixteenth century. It is still uncertain whether the royal family inhabiting the palace may have been related to, or in competition with, the sheikh of nearby Malindi. The palace covers an area of about a quarter acre in the northwest quadrant of the city and, like many of the houses in Gedi, is constructed almost entirely of red earth mixed in with the coral rag and lime dug from its site. Palm frond roofing, or makuti, originally covered most of its rooms, until its walls were reinforced at a later date to support a permanent lime concrete roof.

The palace is made up of multiple courts connected by series' of rooms, all enclosed within a walled precinct. It is divided into two main sections, comprising the main quarters of the palace to the south and the slightly smaller annex, built later, to the north. The courts that cover two-thirds of the palace served as receiving spaces, and were sunken so as to allow for the enjoyment of longer cooling shadows.

Entry to the palace is from the east through a doorway raised two feet off the ground and accessible via a flight of steps. These steps are flanked on either side by six-foot long benches and are adjoined to the north by a tomb built into the gateway corner enclosed with shallow walls. The doorway is composed of five nestled archways, like the gateway of the Great Mosque at Gedi, and has a pediment carved with eight square niches. It leads into the first of the sunken courtyards, known as the reception court. Like all other courtyards of the palace, and the streets of the town, the reception court has coral-covered drains dug into the floor, through which rainwater sift and return to groundwater.

To the south of the reception court is a walled court with a large well that was probably used for washing clothes. A passageway leads north from the reception court to the audience court, and also connects to the major east-west corridor that runs parallel to the audience court. This semi-public corridor separates the main quarters of the palace from the annex to the north, and is also entered separately from a doorway beside the major palace entrance.

Measuring sixteen meters by seven and a half meters, the sunken audience hall has platforms on its south, east and west sides, and steps along its east and west sides. A bench on the eastern platform is thought to be the sitting area of dignitaries and palace judges. Between the audience court and the reception court, is a cluster of four rooms, one of which is a lavatory. The lavatories in Gedi often had two small cubicles with a meter high separation; one cubicle has a deep square pit and the other a platform for two bowls and a divided seat, used as a bidet.

The southern half of the palace is a grid of rooms interconnected in ways that define numerous access paths, and three courts - the domestic court along the southern wall of the palace, another large court with a baobab tree at the southwest corner of the palace and the small women's court that abuts the audience hall to the west. The whole section covers a square area of about two hundred and seventy square meters. A block of interconnected rooms are accessed from three doorways on the south wall of the audience hall. Entered through two of these doors, the first room is about three times wide as long and has a 3.3 meter tall ceiling. Doors flanked by niches for lamps open into two adjoining rooms, which lead further inward to two smaller rooms. These rooms, like many of the rooms in the palace have walls dotted with pegs from which carpets were hung. Between these two inner rooms is a safe that was only accessed via a trap door in the upper portion of the wall.

This central core of seven rooms are connected to additional rooms to the east and are flanked by a domestic court to the south that leads from the eastern rooms to the women's quarters located to the west. Both sections were probably built at a later date. The eastern rooms were most likely used for storage and are clustered around a large court with a baobab tree. Rooms in the western women's section terminate at the small women's court. Some blocked doors here imply that this section was later subdivided into smaller rooms of unknown purpose. The sunken women's court has a large jar built into the southeast corner and a bench and shelf along the north wall, which at one time also had a doorway leading to the annex court. The domestic court before the women's quarters was probably used as a kitchen and has a small well. A small room leading from the domestic court to the women's quarters contained a buried ceramic jar (mafingo), which served to protect the house from evil spirits; mafingo were also excavated in other locations throughout the palace.

To the northwest of the corridor bisecting the palace are a cluster of tombs, which are separated from the palace annex to the northeast by a court six meters across. One of the mysteriously uninscribed tombs is topped with a hexagonal pillar which was once ornamented with porcelain bowls, and another had a red ochre coral boss, with an interlace motif similar to those at Mnarani and Mombasa, that has since fallen. The annex, probably built later in the later fifteenth century, may have expanded women's quarters. Four apartments, each with an inner room, outer room and lavatory, are joined to four open courts. A fifth apartment, with an open verandah, may have served as a royal shop as at the Palace of Husuni Kubwa in Kilwa, Tanzania. A small room at the center where a mziga, or horned stove, was found was likely used as a kitchen. One of the courts of the annex seems to have been undergoing re-plastering, indicated by a pile of mortar, when the palace and the town of Gedi was abandoned at the end of the sixteenth century.

In 1948 excavations began at the town of Gedi and in 1984 the site was declared a National Park. A museum close to the excavated ruins houses archeological finds such as Chinese and Islamic porcelains, glass and shell beads, gold and silver jewelry, coins and local pottery.