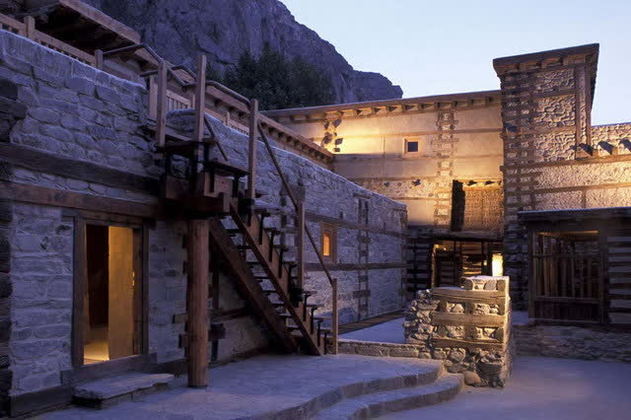 Share
"Located at a height of 2,250 meters, Shigar Fort is located 30 kms from Skardu town. Where it stands on the bank of Shigar stream built upon a massive rock. Once the seat of the ruling dynasty of Shigar, the fort now lies in ruins. It is a three-storey structure constructed from timber cribbage. Although the fort appears to be one structure, in actuality, it is a collection of three separate structures built adjacent to each other during different times.

Each of these structures reflecting different engineering and workmanship skills. It is on account of this that they reflect different roof levels, cribbage structures, woodcarvings and standards of construction. The fort has 40 rooms; these include the cooking areas, servants' quarters and a family mosque. There is a Mughal style garden immediately to the east, which has remains of a structure built on an elevated square platform, which would have been a baradari. The ditch around the platform may have been a water pool similar to a baradari standing in a water body, which was a typical feature of Mughal gardens of Kashmir. The timber elements are richly embellished with animal figures, floral and geometric design and the style of the carvings reflects Kashmiri and Tibetan architecture. The fort's entrance opens onto a large garden leading to the Chinpa village and Chaara (communal open spaces).

The Shigar Fort is part of a group of heritage sites that truly reflect the diversity of nature. It is located in one of the world's most beautiful mountain ranges, with the layout of the fort harmoniously blending into its surroundings. The fort with its method of construction, building techniques and decorative style is a unique architectural specimen. Kashmiri workmen, carpenters, goldsmiths and masons constructed the fort, hired by Raja Hasan Khan with the permission of the Kashmiri Raja. The fort was vacated, due to high maintenance costs, by the present day Raja Muhammad Ali Shah Saba during the early 20th century, who later donated the building to AKCS-P. AKCS-P/ AKTC are currently restoring the fort by converting it into an exclusive hotel and museum, thereby ensuring that its function remains residential."