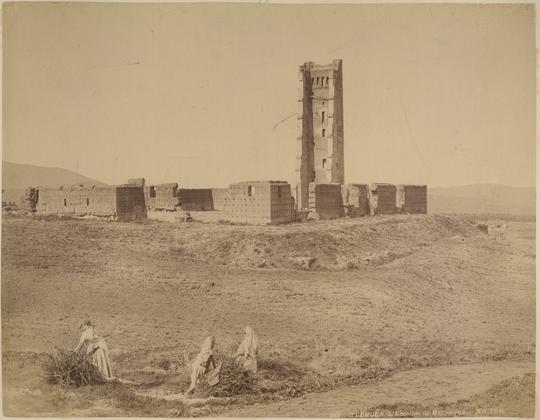 Share
The fortified city of Al-Mahala al-Mansura, the Victorious Camp, was established by the Marinid Emir Abu Yusuf Yaqub just outside of Tlemcen in 1299 as headquarters for his seige on that city in which the 'Abd al-Wadid (or Zayyanid) Dynasty still maintained control. Abu Yaqub immediately began work on a palace alongside a Congregational Mosque.

The city had already become a thriving urban center in its own right.  As early as 1302/702 AH Ibn Khaldun commented on the hammams, caravanserais, and hospital of the city.  He also commented on the extraordinary height of the minaret on the Great Mosque.(1) This was all contained inside walls 1.5 m thick and 12 m high and punctuated with 80 towers, the ruins of which are still visible.  Mansura became know an Tlemcen al-Jadid.  The siege lasted 8 years, and Tlemcen was greatly stuggling with hunger and disease when the siege was brought to an end by the assassination of Abu Yaqub on the 13th of May 1307/11 Dhu al Qa'dah 706.

Some time later, Mansura was largely abandoned by the Marinids for a brief period, and the city partially destroyed.  Yet by 1335/735 AH Mansura was being rebuilt and was once again the headquarters for a Marinid seige of Tlemcen by Abu al Hasan, this time with success.  Mansura then became the seat of government for the dynasty.

Today the rampart of terre pisée flanked by square towers is still comparatively intact, but the interior is land under cultivation. There still exists, however, the ruins of a palace, no longer distinct, a section of a paved street, and probably the surrounding wall in terre pisée of the mosque with half of the great stone minaret which rose above the principal entrance. Although the inlaid ceramic work has almost entirely disappeared, the façade of the square tower, which is 120 feet high, is one of the finest pieces of Mag̲h̲ribī art of the 8th/14th century that survives. The columns and the capitals in marble of the mosque are preserved in the Museums of Tlemcen and Algiers.(1)