Located on the Sabarmati River, Ahmadabad was founded in 1411/814 AH by the Muslim Sultan Ahmad Shah, the ruler of Gujarat. Newly proclaimed, the ruler felt vulnerable in the capital of Anahilvada-Patan, and moved his court to Ashaval, a Hindu settlement that supported him, and which he renamed Ahmadabad, after himself. The new capital of Gujarat developed rapidly with the palace as the nucleus, encircled by a commercial districts. The Bhadra Fort represents the footprint of the original city. The nobility settled outside the city limit, forming their individual settlements. These settlements, known as puras, were named after their respective founders with the suffix of 'ganj' attached, like Nurganj or Muradganj.
Ahmadabad became a part of the Mughal Empire in 1572/980 AH under Emperor Akbar. In 1817/1232 AH, the British took over and the East India Company made it the military and administrative center of Gujarat. No longer the capital of Gujarat in post-Independence India, Ahmadabad is still a principal city with a thriving cotton industry earning it the title of 'Textile City'. Architecturally, the city boasts some of the most interesting examples of fifteenth century Gujarati style. The Jami Masjid and the Mausoleum of Ahmad Shah are an adaptation of indigenous Hindu and Jain architecture; the Siddi Saiyad's Mosque is famous for its exquisite yellow stone latticework, the Rani Sipri's mosque is an elegant dedication to Sultan Mahmud Begara's Hindu wife.
Modern Ahmadabad is spreading west of the Sabarmati River. This portion of the city plays host to the work of two famous architects, Le Corbusier and Louis Kahn. Sanskar Kendra, Mill Owners' Association building and the private residences of Sarabhai and Shodhan were designed by Le Corbusier, while the Indian Institute of Management (IIM) by Louis Kahn is one of the top college for business studies.
Sources:
Davies, Philip. The Penguin Guide to the Monuments of India - Volume 2: Islamic, Rajput, European. London: The Penguin Group, 1989.
R.N. Mehta and Rasesh Jamindar. "Urban Context." In Ahmadabad, edited by George Michell and Snehal Shah, 1. Bombay: Marg Publications, 1998.
DK Eyewitness Travel Guides: India London: Dorling Kindersley Limited, 2002. 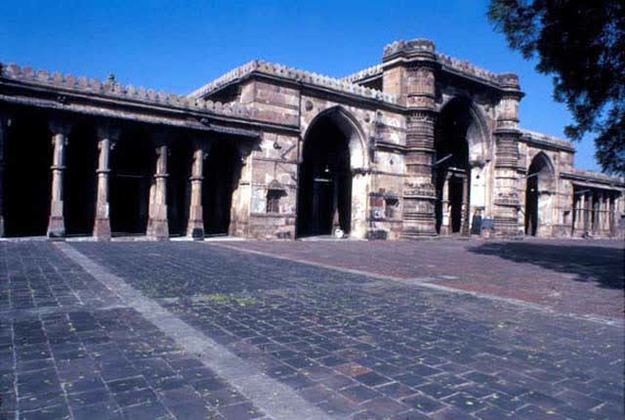 Share
Built in 1424 by Bhamani ruler Ahmad Shah I (1411-1442), the Jami Masjid of Ahmedabad was probably the largest mosque constructed on the Indian subcontinent at the time. Conceived as a part of the emperor's grandiose urban vision, the mosque lies to the south of a royal processional way that travels eastward from the Maidan-i Shah and the triple gateway known as Teen Darwaza. To the east of the mosque are the tombs of Ahmed Shah, his son and grandson. A further adjacent enclosure, Rani Ka Hazira, houses the tomb of the Shah's queen and other royal ladies.

Built over many years, the mosque complex is centered on a vast paved courtyard that is about seventy-five meters long and sixty-six meters wide. The Mirat-i-Sikandari (1414-15) gives detailed measurements of the mosque. The courtyard is entered from three gateways, one at the center of each side. There is a long rectangular ablution tank in the center. It is wrapped by a colonnade on three sides, with the prayer hall occupying the western side.

The prayer hall is rectangular and covered with five domes. The domes are carried on two hundred and sixty columns, which divide the space into fifteen bays or, three rows of five square bays, each with a dome and decorated mihrab along a the qibla wall. Its courtyard façade has a stepped roofline, with a tall portal at its center. The north and south chambers, which are the lowest, open onto the courtyard through five pillared bays of unequal size. The taller central chamber is flanked by two shorter archways and is entered from the tall arched portal with a final bearing dome. Perforated stone screens are pierced into the pillars of the two framing bays. The portal is framed by two columns, which are the remains of two lofty minarets ("shaking minarets") whose shafts were destroyed by the earthquakes of 1819 and 1957. Their decoration is reminiscent of the details of Hindu and Jain temple of the Gujarat and Mandu area.

The central nave rises up to three stories in height and is overlooked by balconies from the central gallery enclosed by perforated screens. The inscription on the central mihrab commemorates the mosque's completion on January 4, 1424, ascribing it to Sultan Ahmad Shah I.